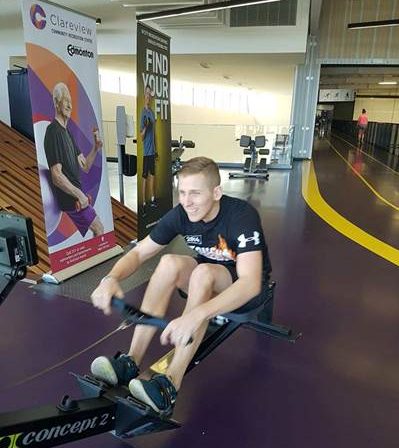 On June 17th, Scott Campbell is heading to Whistler, B.C. to take part in Canada’s Toughest Mudder, and on his way he’s determined to make an impact. From now until he hits the course, Scott is dedicating his fitness journey to the Mental Health Foundation; all proceeds raised from his efforts will be contributing to the Foundation’s purchase of Transcranial Magnetic Stimulation (TMS) equipment for the Edmonton area. He aims to raise $5,000.

Scott has not been familiar with the Mental Health Foundation for long; on March 1st this year he was invited to the Foundation’s Mental Health Breakfast by a friend. Like over 600 other people in the room, he was moved by Dr. Frank MacMaster’s presentation on TMS and Tim Hay’s personal account of the difference this technology makes in his life. So moved, in fact, that he immediately called up his wedding photographer and commissioned a video to promote a newly conceived campaign. Within a week, his 100 Day Journey was born.

Scott had his first foray into Tough Mudder two years ago in Drumheller. The 17 km obstacle course took three hours to complete, made easier by the teamwork-oriented nature of the event. Rather than racing to the finish line for the honor of fastest time, competitors are simply encouraged to finish. The point is that everyone should make it to the end.

Canada’s Toughest Mudder is a ramped-up version, an 8 hour overnight course that pushes contestants to the limit. Scott is hoping to complete the route at least three times.

Which brings Scott to his 100 Day Journey, through which he will not only physically, but also mentally, prepare for a long, cold, muddy night in the mountains. Scott wants 2017 to be a year where he challenges himself, a year where he is more active and adventurous. “Then I started thinking,” says Scott, “how can I make this goal into something that has an impact in my community?”

I know that $5,000 doesn’t seem like a lot, but I wanted to contribute at least a small piece of the Foundation’s $400,000 goal. Like everyone, I have people in my life suffering from mental health issues. Others might also be suffering and not ready to open up.

As part of Scott’s preparation, he is participating in fitness classes all over Edmonton. Every week, he aims to try something new. So far, he’s been running, practiced yoga, learned to Olympic weight lift, and gotten his butt kicked in a workout that ended with an intense round of rowing. You can follow along with his fitness campaign here, or donate to support him and the Foundation here.

Scott believes that a healthy lifestyle is an important part of mental health and he wants YOU to get moving, too, at special by-donation classes that benefit the Foundation and go towards TMS equipment. Join him at some upcoming classes this month and be part of the effort to bring life-altering technology to Edmonton to treat those suffering from severe depression.

April 7th: FREE Fitness is hosting a boot camp at Lexus West Edmonton, 7pm-8pm. Free to attend, but they will be asking people for small donations to go towards Scott’s fundraiser.

April 23rd: A 3 hour self-defense course with Randy from KPC Self-Defense. $55 with 100% of proceeds going to the Mental Health Foundation.

“You don’t realize how big of an impact you’ll make on people who haven’t told anyone they are struggling,” says Scott. We hope to see you out at one of his events!